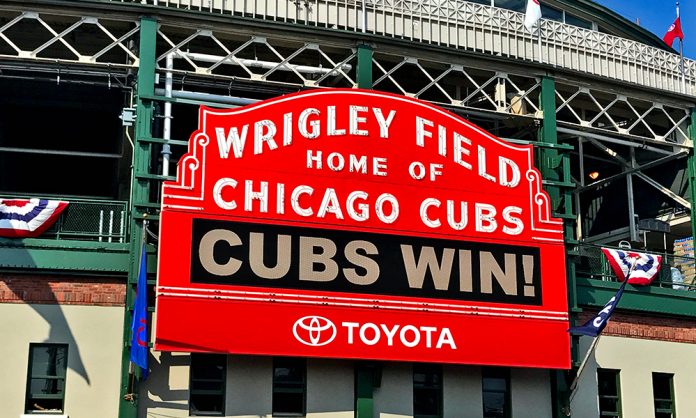 Are you a baseball fan? Do you live in Chicago? If you answered yes to both questions (and even if you didn’t), then you most likely know the Chicago Cubs play at Wrigley Field in a neighborhood named after the club’s ballpark – Wrigleyville.

The Ballpark:
The Cubs’ baseball stadium was originally named Weeghman Park for Charles Weeghman, who obtained a 99-year lease on the property from the city. The Chicago Cubs first made it their home following the 1915 season, when the Federal League disbanded. Later, chewing gum mogul William Wrigley Jr., along with eight other investors led by Weeghman, bought the team. In 1919, Weeghman sold his shares due to financial issues and Wrigley became sole owner. The ballpark was called Cubs Park from 1920 to 1925. It was then expanded and renamed Wrigley Field in 1926.

The Neighborhood:
Wrigleyville is a small section of Chicago’s North Side neighborhood of Lakeview. Lakeview as a whole has experienced a recent drop in home sales, yet the neighborhood continues to be one of the most popular in the city and real estate prices continue to rise. This popularity can be partly attributed to the existence of a beloved baseball team, but also to its close proximity to the lake, bike path, nightlife, shopping and vast array of restaurants. According to data from the Chicago Association of Realtors, in 1991 the average single-family home sold for $273,000 in Lakeview. By 2001, the average sale price was $713,000, and in 2009 it was $1.1 million. The condo market grew rapidly as well. In 1991 the average condo in Lakeview sold for $125,000, going up to $299,000 by 2001, and jumping up to $344,000 by 2009.

What does the future hold for the Cubs and will it have an impact on the Lakeview real estate market? You decide

Living a Happy, Healthy Life in Your Home

5 Things to do in the North Shore: July 1

Know What to Ask Your Chicago Home Builder