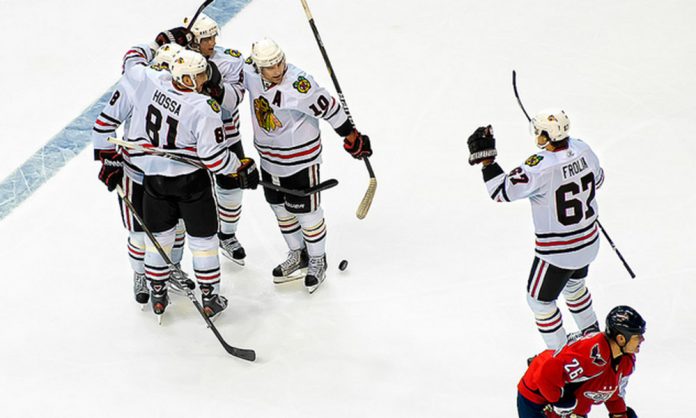 Our coverage of where your favorite Chicago sports teams like the Bulls, and the Bears sleep at night continues with this latest edition focusing on Chicago’s Stanley Cup champions Chicago Blackhawks. As we scoured for pictures of the homes of Blackhawk favorites like Patrick Kane, Jonathan Toews and Duncan Keith, two issues kept coming up – one, the Blackhawks tend to be a much more private team than the Bull or Bears.

Trying to find some decent photos of Corey Crawford’s River North home was harder than watching the Bears defense last season. Second, the guys bringing the Cup back to Chicago get paid a lot less than our city’s other favorite teams who seem to collect heftier paychecks despite little to no playoff appearances in recent years.

Let’s start with left wing Patrick Sharp who purchased a mansion in Lakeview for $2.95 million in 2012. The 7,300 square-foot brick and limestone home features six bedrooms according to Crain’s. Sharp’s home features a spiraling staircase set in the middle of the house in addition to seven decks and balconies adding up to 1,700 square feet of outside space. The home also features a 3-zone chef’s kitchen, three car heated garage with breezeway, two fireplaces and six baths.

Captain Jonathan Toews is almost as busy in the real estate market as he is on the ice. In 2008, Toews paid $1.48 million for a 2,714 square-foot, three-bedroom condo at 450 E. Waterside Drive in Lakeshore East. While trying to sell that property, Toews purchased a new pad nearby at 420 E. Waterside Drive in 2012.

UPDATE: As of December of 2014, Toews has hung up the high-rise living and has opted for a calmer, quieter neighborhood. He now lives in Lincoln Park in a spacious five bedroom, five bathroom house. Hey, if D-Rose and Kane can be neighbors why can’t Toews and Noah?

The old space, which Toews bought for $2.05 million, is a three-bedroom condo featuring panoramic views that include Soldier Field, the Wrigley Building and Navy Pier according to Crain’s. Toews place also includes a 1,000 square-foot roof deck with hot tub, Onyx sinks, and three sub-zero refrigerators in case Toews wants to freeze out his place and get some practice on his days off. The condo was previously rented by Toews’ teammate Marion Hossa during his first season with the Hawks.

Still it seems like his deck game is still strong going from this:

As mentioned our Blackhawks are quite the private bunch compared to our Bulls and Bears. There are no tours of Patrick Kane’s Trump Tower condo or photo spreads of Duncan Keith welcoming photographers into his abode. However, if you ever wondered what head coach Joel Quenneville’s Hinsdale home would look like covered in toilet paper, as it was after last year’s Stanley Cup win, here you go:.

While we’re unable to provide all the dirt on where the Hawks sleep at night, perhaps we can share where they might stumble out of before heading home in the future. A new hockey and champagne lounge collaborated on by Jesse Boyle and Hawks singer Jim Cornelison is set to open at 1952 W. Chicago Avenue in West Town according to Chicago Eater.

The menus aren’t set yet but the champagne theme stems from the bottles of bubbly used to celebrate inside the Hawks locker room after winning the Cup. Hopefully, this season’s Hawks will give us a reason to raise our glasses in joy.

5 Things to do in the North Shore: July 1

Where the Chicago Bulls Go to Sleep