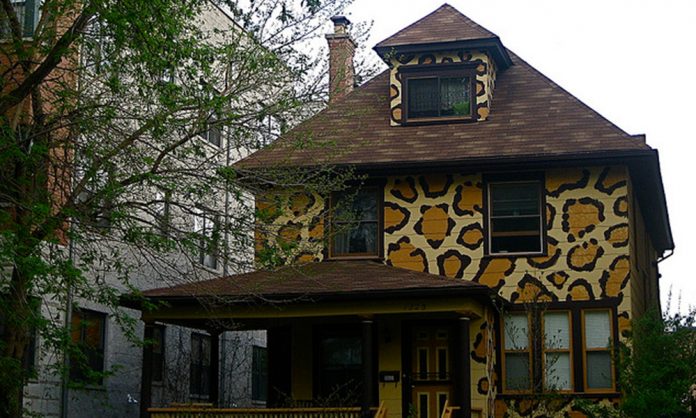 Everyone likes to believe that they think outside the box, but what about when it comes to your home? We’re not talking about a rooftop garden or a bookshelf staircase (as cool as they are). We’re talking about homes in the Chicagoland area that have left the box, boarded a rocket ship and went on to become a unique real estate vision that stands out amongst the bungalows and ranch houses. Let’s take a look at some of the strangest, coolest and most unique homes in and around the Windy City.

When it comes to deciding on how to paint the exterior of your home, arguments and ideas often collide. One person wants dark hues while another insists on bright colors to welcome visitors. When such super-charged debates come up, often times the only solution is a leopard print like the home on Estes Avenue in Rogers Park.

According to DNA Info, painter Michael Riley coated the exterior of the home in the eye-opening leopard print (or giraffe print if you want to get technical) after the six people living there all had different ideas on how the exterior should look.

“The only thing we could all agree on was leopard print,” Riley told DNA Info. Hopefully, like the home’s feline inspiration, these spots will never change

Retired art teacher Jackie Seiden really likes pastels. So much so that her home at 1525 W. Pratt has earned the nickname “The Candyland House” thanks to the explosion of pinks, blues and yellows that color the exterior. Even a drab Chicago winter can’t hide the whimsical eye candy of this Rogers Park home.

According to DNA Info, the art direction of the home was inspired by Seiden sneaking into the former Edgewater Beach Hotel where the colored deco style made a very strong impression on her as a youth. While Oak Park has its fair share of Frank Lloyd Wright homes (it actually has the world’s largest collection of buildings designed by Wright), there is another house in the area that is, well, otherworldly. Designed by architect Errol Jay Kirsch in 1982 and featuring passive solar design features, this modern expressionist structure at 1046 Fair Oaks Avenue looks like a futuristic bunker from the daydreams of George Lucas. In other words, it’s pretty cool. While there aren’t many details regarding the home on the inside, in this case a picture is truly worth a thousand words.

We all wish we could have a 64-foot tall statue of Ramses II on our front lawn. That’s not news. However, bringing that ubiquitous dream to a reality is what separates us from people like the Onan family in Wadsworth, IL. The home, built by Jim and Linda Onan in 1977 and located at 37921 Dilleys Road, is unlike anything in the Midwest outside of an Egyptian museum.

In addition to the giant statue of Ramses II (which is larger than the original in Egypt according to Offbeat Home), the house itself is a 6 story pyramid with a 17,000 square-foot roof made up of stainless steel plates electroplated with gold. The house also has a triple-pyramid topped three-car garage and a driveway lined with 80 stone sphinxes.

Who doesn’t want to live in a castle? George Metz of Quincy, IL certainly did when he had this colossal structure built in 1900 by architect George Behrensmeyer, according to the Ville Katherine website. The brick and stucco castle that looks down on the Mississippi River is located at 532 Gardner Expressway in Quincy, IL.

Standout features include a south tower decorated with a diamond pattern and another tower topped by a Moslem minaret with swirling red and white stripes and a sliver dome according to the Prairie Ghosts website. The website also reports that George Metz, who was a wealthy world traveler, abandoned the castle when Bingo, his 212-pound Mastiff, passed away.

So the next time you think the Midwest is the capital of boring, take a deeper look because strange, weird and flat out absurd homes are all around us.

Why you must use a Realtor when buying new construction

Give the Gift of Warmth this Winter