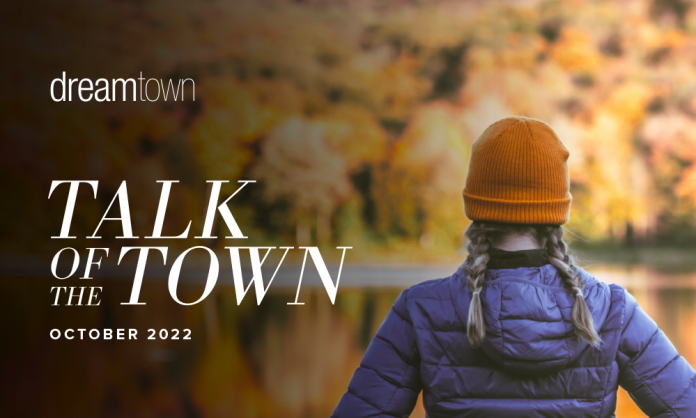 With summer in the rearview mirror and the hustle-and-bustle of the holidays still ahead, October is a good month to pause and recharge. From weekend drives to experience majestic fall colors to nesting at home with an autumnal soundtrack, here are some places to go, things to do, and songs to add to your playlist!

Autumn is a glorious time for a road trip! From Lake Michigan’s sunset coast to the Blue Ridge Mountains, here are a few to consider.

ARTS ROAD 46, INDIANA: Just an hour south of Indianapolis, the 40-mile stretch of Indiana Highway 46 between Bloomington and Columbus is fondly known as Arts Road 46. Winding through some of the state’s prettiest locales including Brown County State Park, this drive will take you through ever-changing autumnal vistas of rolling harvest-gold fields and forested hills awash in fall colors. Along the way, Nashville boasts a thriving artisan community, Bloomington has a vibrant culinary scene, and Columbus is famed for its Modernist architecture.

THE WEST MICHIGAN PIKE: From Michigan City to Mackinaw, this scenic byway traces its history to the early 20th century when the lumber industry was in decline and automobile travel was in ascendance. New lakeside resorts were being developed and there was a demand for greater access to the dunes and beaches of Lake Michigan. The 90-mile stretch from St. Joseph to Muskegon is the heart of the Pike and makes for an easy weekend getaway. In addition to charming resort communities like South Haven, Saugatuck and Grand Haven, there are orchards, wineries and craft breweries to explore along the way.

SKYLINE DRIVE, VIRGINIA: If you’re looking to go farther afield for a longer autumn getaway, New England may be the first place that comes to mind. But 500 miles south, the Blue Ridge Mountains in Virginia are also spectacular—and their autumn foliage tends to peak later, often well into October. Starting in Front Royal, Virginia and winding south along the crest of the Blue Ridge through Shenandoah National Park, Skyline Drive is 105 miles of pure natural beauty offering access to the Park’s lodges, trailheads, picnic areas, campgrounds—and 75 scenic overlooks.

If you only have an afternoon to spare, jump on the Edens to the Chicago Botanic Garden. They have a special October Fall-Color Tree Walk designed to showcase the autumnal beauty of various plantings including Fall Fiesta Sugar Maples, Chinese pear trees and golden-hued Larches.

Just-harvested sweet corn and tomatoes may be a distant memory, but there’s a variety of farm-fresh produce still to be had—including apples, squash, pears, kale, beets, turnips, fennel and Swiss chard. And lucky for us, many local farmer’s markets are still going strong in October – including Tuesdays and Thursdays in Lincoln Square and Saturdays in the West Loop, Lincoln Park, and Evanston.

Don’t want to shop and cook? No worries! Chicago also boasts many fine restaurants with seasonally-inspired, farm-to-table cuisine. Here are three we think you’ll like:

Want to harvest your own Fall bounty? There are numerous pick-your-own apple orchards, but we really like Stade’s Farm & Market, 90 minutes from Chicago in McHenry, IL. In addition to their apple orchard and pumpkin patch, they grow beets, raspberries and green beans that can be picked until the first frost.

From décor magazines to online sites like Pinterest, it’s easy to find inspiration for decorating your home for the season. Now complete the ambiance with your own autumn soundtrack. From smooth jazz to pop and country, here are some songs to get you started. All are available from online music sources like Spotify and Amazon.

Autumn Leaves: Covered by icons like Doris Day and Bing Crosby, Nat King Cole’s version is still our favorite.
Autumn in New York: We really like Diana Krall’s smoky 2020 recording of this 1934 classic.
Autumn Almanac: This 1967 release by the Kinks is an upbeat tune inspired by lead singer Ray Davies’ native North London neighborhood.
September: Crank up this Earth, Wind & Fire hit while you’re out raking leaves—and you’ll soon be dancing!
Autumn’s Not That Cold: Country singer Lorrie Morgan isn’t looking back in this bittersweet breakup song.
When Fall Comes to New England: This just might be the best musical evocation of autumn’s beauty.
We Fell in Love in October: A sweet love song from Girl in Red, written by the Norwegian singer when she was just 16.
Autumn: No fall playlist would be complete without George Winston’s 1980 solo piano album!

Redefine the Heart of Your Chicago Home