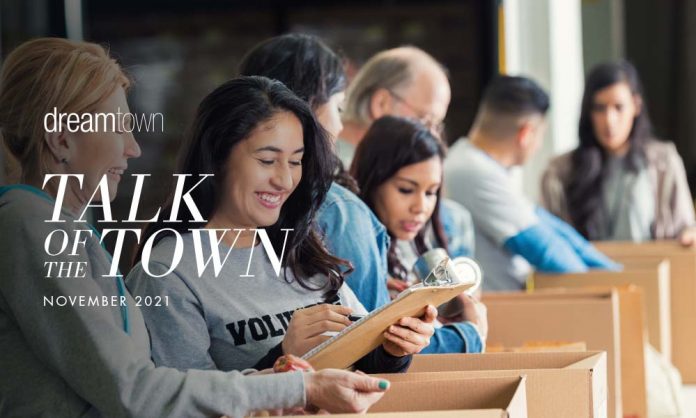 Give Thanks. Give Back

This month, as so many of us take a break from our daily routines to give thanks and express our gratitude, we thought we’d focus on ways to give back and pay it forward.

Charitable giving has a long history dating back to ancient times. So, as we enjoy this season of gathering together with our loved ones, let us also consider how we might reach beyond our own family and friends to engage and benefit our communities at large.

A Brief History Of Philanthropy

Derived from the Greek philanthropia, “philanthropy” simply means Love for Humankind. Indeed, the roots of charitable giving can be found among many different ancient cultures across the globe. Thousands of years ago, the Hebrews used a mandatory tax to benefit the poor and millennia-old Hindu scriptures spoke of giving as an imperative duty.

The origins of American philanthropy emerged from the religious beliefs of early settlers, the communal hunting and food distribution of Native American communities, and practices of mutual aid among successive waves of immigrants. The end of the Civil War and the rise of industrialization saw the development of more systematic approaches as charities adopted emerging business practices to improve the social and economic conditions of the urban poor. By the early 1900’s, modern grantmaking was founded on the large-scale donations of wealthy industrialists like the Carnegie, Rockefeller and Ford families.

World War I saw widespread growth and democratization of charitable giving as Americans gave more than $400 million to the Red Cross through donations and memberships. No longer restricted to large sums coming from the wealthy, charitable organizations increasingly received their support from average Americans donating smaller amounts. Grassroots giving was also spurred in 1917 with legislation that allowed citizens to claim tax deductions for their charitable gifts.

The season of giving is upon us and with the approaching holidays, you’re likely to see more donation requests coming from charitable organizations across a variety of platforms including social media, television and direct mail. The name alone of a charity may speak to your personal passions—from animal welfare and conservation to assisting refugees. The urge to give is strong, but it’s important to evaluate these groups to make sure that your donations are truly benefitting the causes you support.

Fortunately, there are a variety of watchdog groups that do just that—vetting nonprofits and publishing data including the amounts spent on programs, fundraising and administrative expenses. Three sites you might consult are the Better Business Bureau Wise Giving Alliance (give.org); Charity Navigator (charitynavigator.org); and Give Well (givewell.org). CharityWatch (charitywatch.org) is another well-respected site but a paid membership is required for full access to its reports.

As a rule of thumb, charities should spend at least 75% of their annual budget on programs and services—Charity Navigator in particular makes it easy to evaluate if the organization is hitting that benchmark.

As we enter the season of giving, here are nine different nonprofit organizations, both local and nationwide, that you might consider supporting. They represent a wide variety of causes, and all of them have received top ratings from one or more charity watchdog groups.

Are There Tax Incentives for Green Homes?

Time for more: Ideas on how to make the most of...