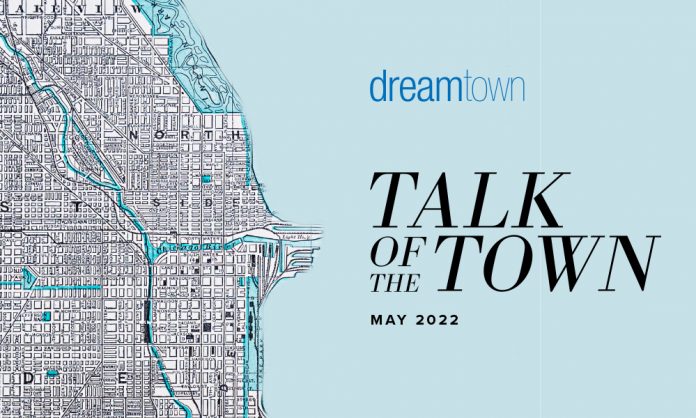 This month we’re taking a look back to share some stories and insights into the communities we call home. From how they got their names to the workhorse of Chicago architecture, the ubiquitous two-flat, we offer a bit of local lore and history.

WHAT’S IN A NAME?

Chicago and most other towns and cities in the Great Lakes region from Michigan to Minnesota are located on the traditional unceded homelands of the Council of Three Fires: the Ojibwe, Odawa and Potawatomi Nations. Many other tribes such as the Miami, Menominee and Illini also called this area home. Indeed, the name of our city is said to be derived from Shikaakwa, a Miami word for the lakeside area where wild leeks, garlic and onions thrived.

Beyond the Native American origin of Chicago’s naming, many of our local community monikers are no less colorful in their history. Streeterville, the fashionable high-rise neighborhood just east of the Mag Mile, is named for George “Cap” Streeter—a squatter who illegally claimed the waterfront area as his own in the 1880’s. Despite multiple attempts to evict him, gun fights and a short stint in prison, Mr. Streeter is back in his namesake neighborhood in the form of a bronze statue at the corner of McClurg Court and Grand Avenue.

Now bustling with boutiques, restaurants and cocktail bars, the popular northside enclave of Bucktown looked very different in the mid 1800’s when it was home to Eastern European settlers, many of whom raised goats. A male goat is called a “buck” and the Polish residents called their neighborhood Kozie Prery—or “Goat Prairie.”

There may be ongoing debate regarding the naming origins of the popular Andersonville neighborhood. Whether named for an 1840’s Swedish landholder named John Anderson or in honor of Reverend Paul Andersen Norland, a Norwegian, one thing is not in doubt: At the turn of the 20th century, Chicago had the largest Swedish population of any city outside of Stockholm and many of them lived in this area north of Foster Avenue.

On the North Shore, Wilmette was named for the Ouilmette Reserve, a 1,280-acre parcel of land that was granted to two of Chicago’s earliest residents: Antoine Ouilmette, a French-Canadian fur trader and his wife Archange, the daughter of a French trader and a Potawatomi woman. The Ouilmette family lived in a log cabin near the present site of the Michigan Shores Club.

Brooklyn has its brownstones. Philadelphia is known for row houses. San Francisco can boast its Painted Ladies. And here in Chicago, we have the two-flat! According to Google Trends data, the term “two-flat” isn’t even used outside of Illinois! So what distinguishes the two-flat and how did it become such a Chicago thing?

The typical Chicago two-flat often has an offset front porch, a bay window facing the street, modest exterior embellishments, and a gangway (another Chicago term!) that separates it from neighboring buildings. Although you’ll find these structures all over the city, they are particularly common in neighborhoods like Pilsen and South Lawndale. These areas saw big influxes of Eastern European settlers in the late 1800’s and by the early 20th century, many of these families had the means to transition from renting to owning—and saw the two-flat as a practical path to home ownership.

Indeed, a “Book of House Plans” from 1915 advertised “Our design No. 144 is a two-family flat designed for a money making proposition. Anyone wanting a comfortable home, and at the same time a good income on the investment will do well to consider this proposition.” The ad also noted that the compactness of the design would mean lower labor costs.

CHICAGO IS FOR HISTORY LOVERS

In addition to the highly regarded Chicago History Museum in Lincoln Park, there are many other institutions where you can delve further into various chapters of local, cultural and international history:

Mitchell Museum of the American Indian
3001 Central St, Evanston | mitchellmuseum.org
This museum is one of only a handful of museums in the country that focuses on the art, history and culture of Native American and First Nation peoples.