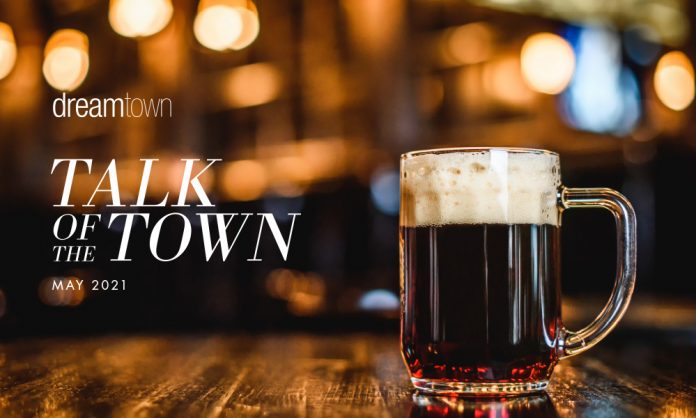 It’s no secret that we Chicagoans love our beer, and this month we’re exploring the many ways to enjoy it across our town: in beer gardens and on brewery patios, at home, and even in Chicago’s history. With summer on the horizon, it’s the perfect time to kick back and crack open a cold one.

Chicago’s brewpubs and taprooms offer cold beers under the hot sun on expanded patios perfect for summer weekends. No matter where you land in Chicago or the suburbs, you’re likely not far from one of these watering holes.

A How-To For Home Brew

Why go out when you can make your very own signature brew at home?

Step One: Prep Your Supplies
Brewing your own beer begins with a few basic pieces of equipment: a brewing kettle, fermenter and air lock, funnel, sanitizer, auto-siphon, stir spoon, bottles and bottling supplies, and a beer recipe kit (or, for the more experienced, your own ingredients). Most brew supply shops sell kits that have everything you need. Make sure you thoroughly sanitize your supplies before you get started!

Step Two: Brew Your Wort
Now it’s time to brew. Begin by steeping the grains in your brew kettle until the water reaches 170 degrees (about 15 minutes). Remove the grains and bring the water to a boil. Once it’s rolling, remove the kettle from the heat and add the malt extracts, then return to a boil. Next, you’ll add your hops according to your recipe. Your brew is now called “wort,” or sugar water. To cool it quickly, put your pot into ice water.

Step Three: Fermentation
All your wort needs to become beer is a little fermentation. To do so, put the cooled wort into the fermenter, add water, and stir it up to aerate. Add yeast and seal the fermenter, then store it somewhere dark and cool. The yeast will take it from here.

Step Four: Bottle & Enjoy
Fermentation usually takes about two weeks, at which point your homebrew is ready to bottle. As always, begin by sanitizing everything—bottles, bottle filler, etcetera. Then boil your priming sugar and add it to the bottling bucket. Next, transfer your beer from the fermenter to the bottling bucket, then to the bottles. Refrigerate for two weeks, then pop the top on your own brew and enjoy.

History In The Making: Beer & The Chicago World’s Fair

The 1893 World’s Columbia Exposition in Chicago’s Jackson Park left an indelible mark on the city and the brands that were born there, from Cracker Jack to Juicy Fruit. Of all the industries on display, brewing was arguably one most affected by the fair.

A special report presented to the Fair’s Committee on Awards found that America had recently become the third-largest producer of beer in the world, putting the States behind only Germany and Austria.

With beer’s popularity on the rise, there were several German-style beer gardens across the fairgrounds and on the Midway Plaisance, where the world’s first Ferris Wheel towered overhead.

While Pabst Blue Ribbon is said to have claimed its name during the Chicago World’s Fair (the can even reads “Selected as America’s Best in 1893”), the beer did not actually win the blue. First place went to Anheuser-Busch’s Budweiser.

While you can’t time travel to the fair, you can get a taste of the era’s beer in Temperance Beer Co.’s All the World Is Here, a collaboration with the Field Museum and the Chicago Brewseum. The cream ale is made from barley malt and American corn varieties featured at the Exposition.