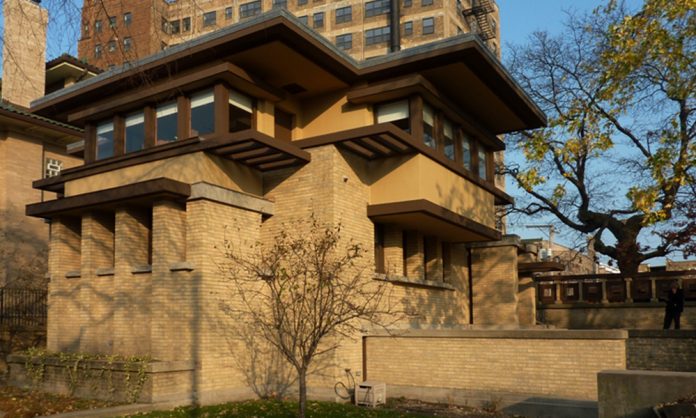 Chicagoans and folks from all over the country pour into the city and Oak Park to take tours of the homes designed by beloved American architect Frank Lloyd Wright. While admiring Wright’s awe-inspiring structures throughout the Chicagoland area is a treat in itself, ever wonder what it would be like to spend the night in one of his historical creations?

Sounds like a dream come true, doesn’t it? Well it is because you can now get some sleep in the Emil Bach House on Sheridan Road in Rogers Park. The home, built in 1915, will debut as the only house designed by Wright in the state where visitors can spend the night.

According to Crain’s, sleeping in the home is possible thanks to Col. Jennifer Pritzker’s Tawani Enterprises who are performing the finishing touches in their quest to meticulously restore the home. Pritzker is the granddaughter of the founder of the Hyatt hotel chain.

Photo by James CaulfieldTawani’s chief operating officer, Sean McGowan, stated that the intention behind restoring the Emil Bach House was to “take a property that has not been taken care of over the years but is pretty magical, and bring it back to life at the highest level of quality, [while] developing an income for it that offsets the large costs that go into it,” according to Crain’s. Tawani purchased the Rogers Park real estate for $1.7 million in 2010.

The intent to return the structure to its former glory was no easy task. Six art glass windows designed by Wright and removed 50 years ago were reproduced from an original that currently hangs in the Art Institute of Chicago. Undamaged samples of the interior walls’ original yellow hue found hidden behind a piece of built-in furniture were copied. The Roman brick that surrounded the fireplace wall, which Wright specified, has been restored by getting rid of the stucco that was put over it in addition to numerous other restorations to the home.

However, not everything from the past remains in the home. Moveable furniture from back in the day is out and for good reason. As Tawani chief of staff Mary Parthe points out to Crain’s, “the furniture that Frank Lloyd Wright built wasn’t the most comfortable.”

The Emil Bach House offers three guest rooms with modern amenities and the living and dining areas are “accented with well curated objects and furnishings juxtaposed to highlight the, architecture and craftsmanship of Wright” according to the press release.

So how much does it cost to do spend the night? The property currently costs $750 per night to rent with a required two nights’ stay. Tawani Enterprises is offering the domicile as a vacation home and event space. Guided tours are offered on Wednesdays from May 7 through September 24.

Simple Ways to Winterize Your Home