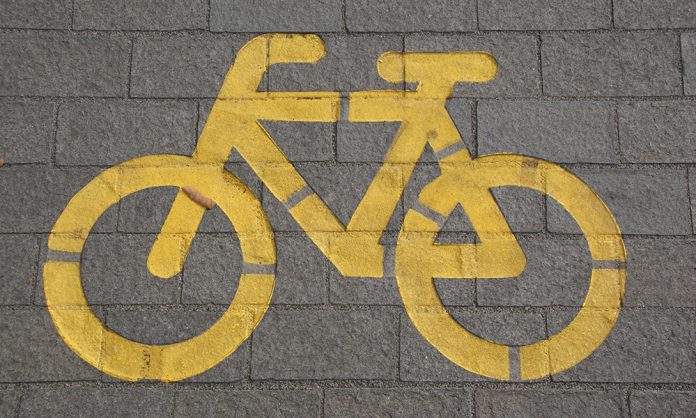 Before Ted Villaire and his wife bought their new home in Irving Park, he researched neighborhood bike lanes using the Chicago Bike Map. They biked around the neighborhoods and Villaire timed the routes to his office.

“We wanted a place that offered bike lanes and easily bikable streets in the vicinity,” he explained. “We wanted easy access by bike to lots of restaurants, multiple movie theaters, grocery stores, and other amenities. We also wanted to live fairly close to the places where we work.”

Starting their search by bike made sense for them.

“Riding bikes allowed us to stop frequently and write down addresses and take photos of houses for sale – to show our real estate agent,” he explained. “Also, it allowed us to get to know the neighborhood better – explore it at a slower pace.”

That kind of search has gotten easier since Chicago started creating buffered and protected bike lanes, and documenting their locations on a map.

According to the city’s website, Chicago currently has more than 200 miles of on-street protected, buffered and shared bike lanes, many miles of off-street paths (including the 18.5-mile lakefront trail), more than 13,000 bike racks and sheltered, high-capacity, bike parking areas at many CTA rail stations. The city’s cycling plan is for there to be a 645-mile network of biking facilities in place by 2020.

In fact, ease of cycling is increasingly on the wish lists of city buyers, says Dream Town Realtor Sam Powell, whether they are avid or casual cyclers.

Some buyers, she said, “are more concerned about their safety and want to have a better sense of where there are bike lanes for that level of peace of mind in a big city. [Other] clients bike 10 miles to work each day. They are less worried about the bike lanes and ride everywhere.”

The city’s new Divvy bike share program, with 300 bike stations around the central city, has prompted some home buyers ask about the proximity of Divvy to their future home, she said.

“They dig the notion that there are bikes that are now available for rent that were not previously at this level,” she said, “and they are asking more and more about where the nearest Divvy bike station is as well as Zip or Go cars for those every once in a while needs.”

But for those who already own a bike, or two or three— bike storage is key.

Some are fine with storing their bikes on a hook right in the unit “like art hanging on the wall,” Powell said. But an enthusiastic cycling couple could own a half dozen bikes, and they need a designated bike storage area.

“Secure and weather-protected bike storage in the building or garage is extremely important to some,” says Powell. “We have ruled out buildings with incredible units because they could not support their bike storage needs.”

Bryan Tillman and his wife are both enthusiastic cyclists who like to ride their bikes to work in Chicago. They had been living in Lakeview, and when expecting their second child, they began looking for another place. They looked everywhere, even the suburbs, but ended up purchasing in the same area as their current home.

“One of the things we didn’t want was to spend all of our time in the car,” he said. “We evaluated the cost of a second car and a longer commute. When everything was factored in we would spend more time with the kids and it was cost neutral to stay here.”

The young family loves the buffered bike lanes and he and his wife can still both bike to work. One key to their decision – the high rise has a secure indoor bike cage area inside the garage, which is overseen by a valet.

In many parts of the city, there is a growing awareness of sharing the streets, says Villaire, who is the communications director at Active Transportation Alliance, an organization that promotes active, clean transportation.

“Fortunately,” he said, “in Chicago people driving cars are very accustomed to sharing the road with people biking – for the most part. We knew that any neighborhood in the city would have residents who treat people biking with respect and courtesy.” (For another point of view on cyclers versus drivers, read this.)

Here are some tips as you start your search for the perfect bike-friendly home and neighborhood:

$5 Fixes to Keep Your Chicago Home in Great Shape!

10 Ways to Make Your Home Greener and Save Money

Moving to A New Chicago Home? Have a Checklist Ready

How to Avoid the Emotional Homebuyer’s Top 5 Mistakes