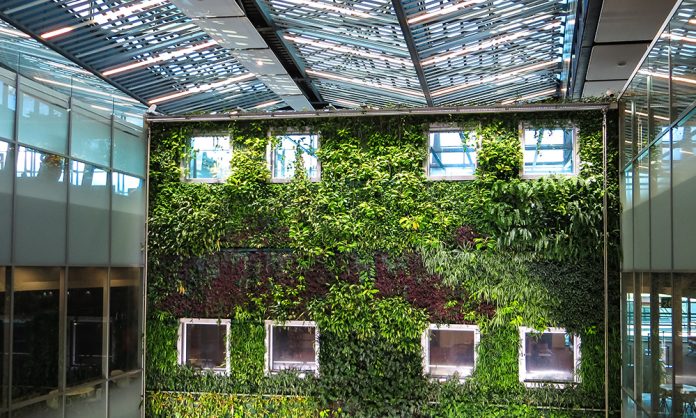 Chicago experienced such an extended deep freeze this past winter that the thought of planting anything requiring fresh air, water and sunlight was pretty much a pipe dream from November to just a weeks ago. However, while Mother Nature made sure our green thumbs remained firmly planted in gloves for months on end, there is a way to bring some garden variety into your homes regardless of the weather outside thanks to living walls.

Living walls, also known as green walls, are self sufficient vertical gardens attached to the exterior or interior of a building or home according to Green Over Grey. A living wall can support many different kinds of plants including ivy, vines, grasses and drought tolerant succulents and tropical plants for interior walls according to The Living Wall website.

In addition to the beauty they exude, living walls provide benefits like purifying the air and reducing energy by keeping the interior cool during the warm months and acting like insulation during the cold months says Fresh Home.

These living walls have infiltrated Chicago in both residential and commercial settings. Crain’s recently reported how Nicole Lerescu installed a piece of living wall art into her Ukrainian Village home last fall. The 30 year old lawyer used Chicago-based K Dille Designs to create the living wall, which consists of succulents and dried moss custom fit into a 5-by-2 wood frame. An opening along the top enables the plants to be watered.

“When people come over and get closer to the art, they’re surprised to see it’s alive because it’s so unexpected,” Ms. Lerescu told Crain’s. “We have other art and sculptures in our home, but this is a big statement piece.”

Foodie’s may have noticed the lush living walls installed at Nico Osteria on the Gold Coast and Lincoln Park’s Boka as well as BellyQ and Urbanbelly in the West Loop.

“The walls are show-stoppers,” Chef Billy Kim told Crain’s of the installations at his West Loop restaurants. These living walls were provided by Sage Vertical Garden Systems and Bottle & Branch, both based in Chicago. “Every day we get people telling us they want one in their house, and they ask us where they can get it.”

So how can one go about installing a living wall in their abode? Chicago-based Omni Ecosystems and LiveWall LLC provide installation kits and have extensive knowledge when it comes to installing and making the most of your living wall. According to Crain’s, DIY homeowners can expect to pay somewhere between $40 and $60 per square foot for LiveWall’s living wall system.

For those who prefer a professional installation, LiveWall estimates a cost somewhere in the neighborhood of $95 to $125 per square foot according to their website. The degree of maintenance involved to keep your living wall doing that just varies depending on the kinds of plants chosen.

So if you can afford it, the benefits, beauty and bragging rights of having a living wall in your home make it a great and green idea for those looking to bring a garden feel indoors.

After all a copy of Van Gogh’s Still Life: Vase with Twelve Sunflowers is cool, but an actual living garden hanging above your television is a lot cooler.

5 Things to Consider Before Buying a Foreclosed Home

A Moving Experience: How to Pack, Move and Keep Your Sanity

Is It Smart to Take My Chicago Home Off the Market...