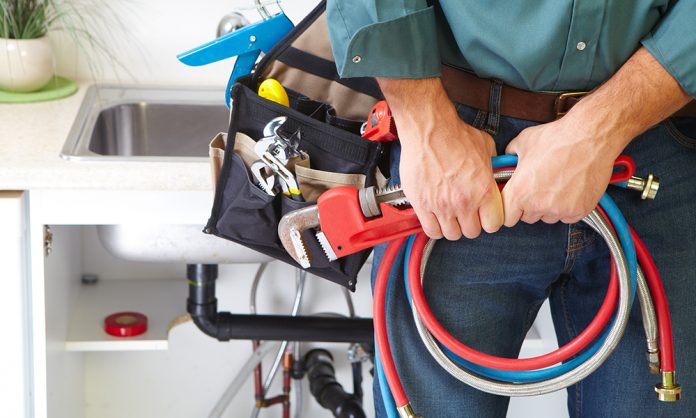 Before you list your house, there usually are a hundred and one things to fix. Chipping paint, a broken lock, cracked pavement, cruddy grout. Oh, don’t get me started.

Yes, you can call professionals for every single thing. But many of us want to tackle some of the work ourselves. We think we can do it, we ought to be able to do it, and nobody is going to take a job this small — our mind games are as endless as the list of repairs itself.

These were the sorts of thoughts I was using to kick myself mentally this past week. All I wanted to do was refresh the grout in the upstairs shower.

Note that word, “refresh.” It sounds like something that could be done with an old toothbrush and a bowl of bleach. But in several places the grout had vanished, and when digging a straight line between the tiles with my special grout removal tool, out fell the tiles, kerplunk, into the tub.

And of course, behind the tiles I discovered scummy-looking, decaying wood.

Tile pros would have pulled down the whole 40-year-old wall and started from scratch. They would not have been finished before my company arrived. They would charge a fortune. If I kept trying to fix it myself, chances were good that I would not die immediately, and would at least be able to finish the shower before I died. I would avoid a lawsuit.

So I splashed some bleach into the abyss, patched it all up with – this is true – a piece of cardboard and wood filler. Managed to get the tiles to stick to the dry, fake wood. Re-grouted. Did a great job re-caulking the area using the tube of tile adhesive, which in my defense looked a lot like the caulk tube, especially if you don’t read the large lettering. Wiped off the adhesive and started over with the caulk. The shower was done, the wall was dry, and has so far held up through three guest showers. Like most home repairs, this one suffered from potential project escalation – where a simple, two-hour fix-up can turn into a major remodeling.

For our next project, re-finishing the hardwood floors, we are calling the pros. I have a relative who opted to try this himself. He got all the work done, but the finish was gummy. He had to strip it all off and re-do it. He had a good attitude about it, rationalizing that he now knows what not to do. I do not want that much education.

Lou Manfredini, the home repair expert with Ace Hardware, had some advice for picking your do-it-yourself projects. In a nutshell, he says, think first about your comfort level and limitations. Watch some “how to” videos online.

He broke down some typical home fixes into four typical categories, which increase in degree of difficulty.

1. Paint it yourself. Most people, he said, can paint if they take time to research their project and do it slowly. In recent years, manufacturers have developed a variety of products that help – such as paint/primer blends that do it all in one coat.

Note that important phrase – take time. All too often, he said, people set a deadline, such as Thanksgiving, to get their home projects done. Then the weekend before the deadline, they are rushing through a project, slopping paint all over the place. Manfredini notes that you should not forget such project basics as drop cloths, painters tape and the like.

“Know your limitations,” he added. “Think about your confidence on ladders. A 6-foot step ladder is one thing, but painting your second-story eaves, that’s another.”

2. Light carpentry. Even if you have never tried it before, you can probably put in a new door knob. It’s usually a simple matter to replace cabinet handles and many of us can fix a minor door or window frame problem with wood filler.

“Start with things that are cosmetic, not structural,” Manfredini suggested. “Eventually you will start to see how things go together and gain confidence.”

3. Quick plumbing fixes. Actually, Manfredini just said “plumbing,” which gave me a chill. Pipes, you know, leak, and can require crawling under things while carrying large expensive tools. But he was referring to things like leaking faucets. For a minor leaking faucet, turn off the water under the sink, take the faucet off with a screwdriver and pull out the washer or cartridge. “Take it to the store and say, ‘I need one of these,’” he said. “Put it in the faucet and it won’t leak anymore.”

4. Electrical. “You need a healthy respect for how it works, how light fixtures get installed and so on,” he said. “In an older home, there can be a rat’s nest behind the walls,” he said. “Someone who didn’t know what they were doing may have made it so things don’t match the video. Sometimes I don’t even want to touch it.”

This might be where the home repair train stops to let on a professional. Even the experts know their limitations.