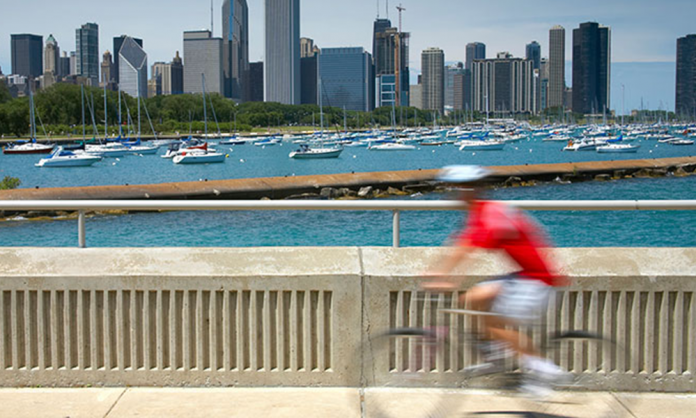 Chicago is a great city for those who prefer to ditch their cars—according to Walk Score, an organization that gauges a city’s accessibility by foot or bike, Chicago is America’s fourth most walkable city and among its top ten most bikeable. In fact, Bicycling magazine found that Chicago has seen a 181% increase in the number of trips made by bicycle.

What’s more, a study by the National Association of Home Builders (NAHB) found that bike-friendly amenities are ranking higher and higher with potential buyers, particularly when they’re investigating newer developments.

Sixty percent of those surveyed listed jogging trails—also useful for biking—as their number one amenity that “would seriously influence [them] to choose a community,” said Steven Melman, director of economic services at NAHB in an interview with the Chicago Tribune.

It comes as no surprise that developers have caught on to this trend and are now increasingly offering amenities that cater to biking residents in  Chicago condos.

For example, at  River West’s new apartment building K2, residents can keep their bike in a large storage room that accommodates 215 bicycles. Plus, a bike “kitchen” provides resident riders with an industrial air pump and a vending machine that dispenses inner tubes, Gatorade and other useful products.

Residents can also perform quick fixes at the work station that’s stocked with tools, or spray down their dirty bike in the wash bay. The storage room exits to Kinzie Street, providing quick access to a protected bike lane just a block away.

East of Randolph, the Magellan Development Group has also taken notice of residents’ increasing use of bicycles. And for the last eight years, the company’s president, David Carlins, has watched the number of cars occupying parking spots drop. His logical response to this trend was adding bike storage rooms to every residential building in his Lakeshore East development.

Outside of Chicago, the Des Plaines River Trail is accessible through an entry point just across the street from Lincolnshire Place condominium. After realizing that an increased number of its residents owned and were riding bicycles, developers converted three of the building’s parking spots—worth $75,000—to a bike storage area.

Rahm Emmanuel’s “Cycling Plan 2020” will only encourage this amenity trend in  Chicago real estate.The plan includes a 645-mile network of on-street bikeways and will provide more protected bike lanes than any other city in the U.S.

Are You Getting All Your Property Tax Exemptions?

Redefine the Heart of Your Chicago Home