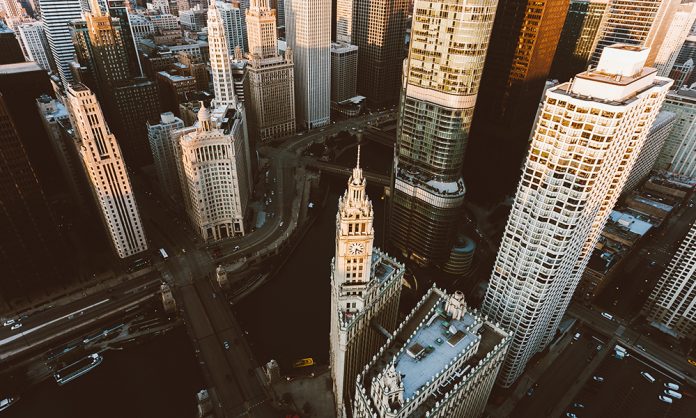 So where does a billionaire entrepreneur who owns the Jacksonville Jaguars and England’s Fulham soccer team call home when he’s not busy revolutionizing the auto parts industry or jumping continents to catch games? If you’re Shahid Khan, the choice was easy.

The Pakistani-born self made man who came to the United States at the age of 16 and studied engineering at the University of Illinois, chose the greatest city on earth ( at least in our minds) when he picked Chicago as his home base.

But where in Chicago would such a prolific businessman choose to lay his head at night? In 2006, Khan, 61, who always longed to be an architect, found the 61st floor of Park Tower as the ideal spot for him and his wife, Ann, to take in the essence of Chicago.

Providing breathtaking 360-degree views of the Windy City, the penthouse at 800 N. Michigan Avenue on the Near North Side instantly caught Khan’s eye prompting the billionaire to pay $8.3 million for the 9,000 square foot penthouse.

When one thinks of a billionaire’s real estate, images of tightly secured fortresses often come to mind like a cross between Citizen Kane’s Xanadu and Bruce Wayne’s Batcave. Yet Khan was not interested in a closed-off stuffy atmosphere for his abode, choosing instead to make the space inviting instead of impenetrable.

An open floor space banishes privacy to the bedroom areas resulting in a main living room that’s 54 feet long accompanied by what Forbes calls “a wall of windows stretching nearly all the way to the 14-foot ceilings.” The open space sure comes in handy when guests arrive, as evident by the Khan’s daughter’s engagement party, which easily held 140 guests.

Khan used his vast experience as a world traveler to furnish the penthouse with hues of red, gold and brown

that colors the rectangular layout , which Forbes described as “fit for a Chinese emperor.”

The Khans bypassed Bed, Bath & Beyond by purchasing 300-year-old 40-foot antique rugs from Uzbekistan. Other unique home furnishings include a chandelier from the torn down Hotel Murano in Italy, Renoir’s “Portrait of Pierre Renoir in a Sailor Suit” and two Manolo Valdes portraits. Even the bathroom gets the historical treatment as the shower space offers floor-to-ceiling-views of Chicago and is modeled after the ancient spas in Pompeii.

Despite his expensive taste, Khan is adamant that the penthouse is not a museum where visitors would be too scared of breaking anything to unwind and have a good time.

“We’re going to have over friends, family, and enjoy it,” Khan says according to Forbes. “It goes without saying that you do get some red wine spilled, and you have to be ready for that. But you can’t put plastic covers over everything.”

Inspired by Mies van der Rohe’s “less is more” design strategy and decorated by Chicago-based interior designer Suzanna Lovell, Khan has created a living space where classical mingles with modern resulting in the billionaire’s goal to remain “true to the space” reports Forbes.

“Urban living is an intersection of business and personal life,” Khan told Forbes. “You need a space that people want to be a part of.” Check out the photos of Park Tower.

Where the Chicago Bulls Go to Sleep