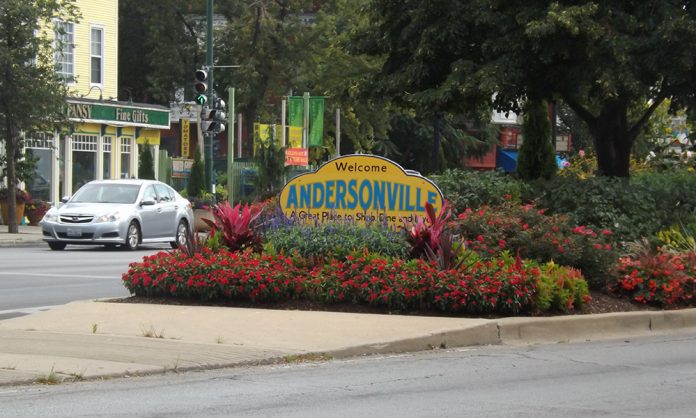 To anyone but a Chicagoan, Andersonville is the name of notorious Confederate Civil War prison where Union soldiers died by the thousands.

For those who live in Chicago, however, Andersonville is small, quaint neighborhood just west of the northern end of North Lake Shore Drive, where it turns into W. Hollywood Avenue.

On the west, the boundary is N. Ravenswood Avenue and on the east, the official boundary is almost to North Broadway.

To Mark Winkelman, a residential consultant with Dream Town Realty, Andersonville is home.

About three years ago, he was living in the Lakeview area of Chicago, but his wife really wanted to move to Andersonville, so they packed up their belongings and ferried them to a three-bedroom condo on the top floor of a four-story building.

“She liked the neighborhood,” he explained. “There are a ton of great restaurants, a lot of good shopping and the area feels like a small-town. We don’t have to walk far down N. Clark Street to get to great sushi, great Thai, great Italian. There are good wine stores, taverns, bars and grocery stores. Plenty of clothing stores, antique stores, even a bakery.”

In short, everything a small town offers, but with the stores being a lot hipper and the restaurants more multicultural.
It even feels small-town safe. “My wife is comfortable walking the neighborhoods at night,” says Winkelman.

There was even something extra for Mark. Until leg injuries began to plague him, he was a runner and a participant in five Chicago marathons. Although he no longer competes, it’s only a mile to the Lake Michigan beaches where he runs or bikes along Lake Shore.

“If I walk directly east from where I live on the south side of Andersonville, I end up at Montrose Beach,” he noted.

Unlike other Chicago neighborhoods, Andersonville missed much of the boom and subsequently much of the bust. If someone would have bought a similar, 1,500- to 1,600-square-foot, three-bedroom condo to the Winkelman’s at the same time they moved to the area, it would have cost about $450,000. Today, that unit would probably be priced at $400,000.

The mix of properties, apartments, condos and single-family homes is the same in Andersonville as in the rest of Chicago, with the same type bottom and top sales. One can still find a busted, one-bedroom condo in Andersonville for about $50,000. On the other side of the market, there’s currently a listing for a 10,000-square-foot, six bedrooms/7+ bathrooms, single-family home for $2.9 million.

The average single-family house in Andersonville sells for $1 million while the average condo price stands at $288,000.

As of late spring, there were 31 active listings in Andersonville, but 20 were under contract. Active listings usually stay on the market for 62 days.

“We love it here. It would take a lot for us to leave,” he said. “You think of Chicago as being a huge city, but in this neighborhood you can walk to stores, restaurants and bars. People know who you are and when you walk on Clark Street, the main thoroughfare, someone will yell your name so you go talk to them. That’s the kind of vibe Andersonville has.”

The Strangest Homes Around Chicago